What drew me to Ella Fitzgerald, when I first fell in love with jazz singing, wasn’t the high-flying live performances, with chorus after chorus of scatting on “Mack the Knife” or Ellington’s “Diminuendo in Blue.” Rather, it was that alternately sweet and husky voice staying true to the melody and lyrics with her own impeccable phrasing, as she did on her many “songbook” recordings of music by the greats — Berlin, Gershwin, Ellington, Porter, Rodgers & Hart, Arlen, Kern, Mercer…….

Lori Zuroff, who makes her recording debut as a solo jazz singer on Ladybug, is a bit of a late bloomer. While she has always loved a variety of music, she did not begin seriously singing until she was nearly 40. At that time, she started by joining a women’s barbershop quartet and the Acton Community Chorus. Since then she has performed with a variety of rock, blues and r&b bands while blossoming into a fine solo jazz singer based in the Boston area. Along the way she studied with the late Rebecca Parris and Sheila Jordan, developing her own individual sound.

Ladybug features Lori Z. with a group that also includes pianist-arranger Molly Flannery, bassist Bill McCormack, drummer Miki Matsuki, and tenor-saxophonist Bill Vint. Performing eight of her favorite songs from the Great American Songbook, the vocalist puts plenty of quiet feeling into the lyrics, swings lightly, and displays a warm voice. She begins by reviving “You Made Me Love You,” a rarely-performed standard that had three prior lives as hits for Al Jolson, Judy Garland and Harry James. Her concise version makes the song sound fresh and lively.

Other highlights include “When Sunny Gets Blue” (which has a nice swinging piano chorus), “The Nearness Of You” (during which Vint takes an explorative spot on tenor), and the interplay between the singer and the saxophonist on “You Don’t Know What Love Is.” Lori Z. is heard at her best during her slow and saucy vocal on “Honeysuckle Rose” and on “In A Sentimental Mood” which has the pianist hinting at Duke Ellington’s classic version with John Coltrane. Also included are the bossa-nova “Meditation” and the closing “For All We Know” which has some particularly heartfelt singing.
Ladybug, which is available from www.amazon.com, is an excellent outing for Lori Zuroff and recommended to listeners who love hearing vintage songs sung with honest feeling and optimism.

Singer Lori Zuroff has been a longtime mainstay in the Metrowest music scene performing with her band Lola Sweet & The Burbanites, the Acton Community Chorus, the ladies barbershop group, Sweet Adelines, and running various blues jams throughout the region. Now, Lori is stepping out on her own with a new jazz album entitled Ladybug. It’s a record that reveals a singer at the top of her game and one that chronicles another chapter of her ongoing musical journey… 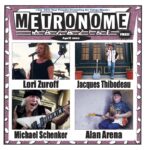 Boston, MA since 1985! Grab a copy at your favorite music store.

Lori Zuroff does jazz like no other jazz singer. Zuroff, on her first release, Ladybug, offers a pleasant array of classic jazz pieces. Although these titles have been familiar to serious music fans for generations, Zuroff, with a combination of style and finesse, confidence and knowledge, and sexy cool, transforms them into songs that are fun all over again.

Lori Zuroff has made a special contribution to our local New England jazz scene with this Ladybug album. Zuroff and her band mates deliver a lively and enjoyable collection of songs that illustrates that jazz can be a fun genre to listen as well one that challenges both listener’s and players. This kind of application of jazz keeps it fresh for a whole new generation while pulling in older fans of these favorites.

Boston’s jazz, blues, and rock chanteuse Lori Zuroff showed she was born to sing. With a nuanced delivery, Zuroff moved her voice around like an ice skater on a frozen lake. Zuroff employs a wide variety of techniques; she finessed the vocal melody, coaxing it into something wider by each verse’s end. Making words jump with energy is also a Zuroff stock in trade, her vocal glide cruising over her guitarist’s notes.